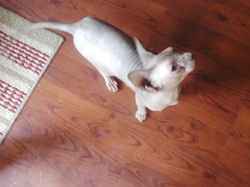 Pharoah is our male. He is 80% blue and 20% beige coloring The picture on the
top left was him as a kitten. His father was all blue and his mother was
beige/nude. He has dark intense blue eyes which really stand out and he's our
lover boy. He looks a lot like a naked Siamese cat haha. He loves being snuggled
and held and will stay on your lap or by your side all day if you let him. He
gives us kisses all the time and he loves to suck on our skin haha. He has done
that since he was a baby and we think he thinks he's a dog. He wags his tail and
sniffs people and just acts so much like a dog its funny. He loves to give you
kisses but watch out, he's been known to leave a few hickies haha. He comes from
Champion bloodlines as well and "gorgeous" is an understatement to describe him.
He loves children and other animals as well and really truly is a lover. He does not have any territory issues and does not mark anything. He's
very well behaved. He is vocal when he wants something and does good in his
baths except sometimes he whines. 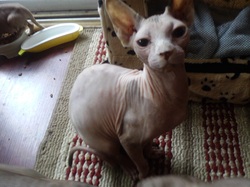 This is Isis, one of our females. The bottom picture to your left is when she was a kitten. She's a very
smart and playful girl. She has a lot of energy and is a total goofball. She is
mostly beige nude with blue-ish/black spots and has ice blue eyes the camera
just doesn't seem to capture.They almost look so ice they look white! Her
parents were the winners of quite a few cat shows however we've never shown her.
She loves being sweet and cuddly but on her terms, after all she is a
princess.When she wants to be loved, she will sit and cuddle with someone for
hours!  She's spoiled that's for sure and is great with children, other cats and
even dogs. She's very curious and likes to play "parrot" on our shoulders. She
loves playing and running around. She's just a complete sweetheart and such a
little lady!I 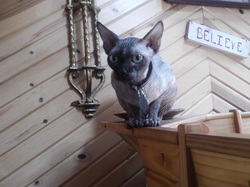 Cleopatra came to us from Michigan. She is mostly blue in color with swirls of beige in her skin. She has intense Gold eyes! She is very affectionate! She is always down for cuddling under a blanket and will snuggle for hours. She will let us know when she wants something, she's very opinionated to say the least haha. She has found her favorite companion in our home is a Chihuahua. Those two love each other and cuddle and play all the time. Her parents were also show cats but we have never shown her either. She loves tanning by the window on her perch. She isn't to fond of her baths but they are growing on her. She has a queen complex hense her name but she is a sweet as can be!